A Simple Survey of Screen Sizes

I got a bit frustrated the other day. I’d come across yet another site that was designed for at least a 1280-width screen, meaning it wouldn’t fit on my trusty 1024-width laptop and I had to scroll horizontally. “Yada yada, first world problems”, I hear you say, but considering the small effort it takes to make a web page look good at different widths (and the abundance of RWD tutorials out there now), surely it’s worth web designers making such tweaks. Besides, there’s got to be many other users in my position, hasn’t there?

I decided to find out, so I took a sample of around 5,000 unique visitors to my demo pages at people.opera.com/danield and noted their screen sizes based on the JavaScript screen.width and screen.height properties. Of course, this audience is going to be pretty techie and not representative of the world at large, so I did the same sampling at the same time on a long-running personal site of mine aimed at new dads — a pretty non-techie audience. 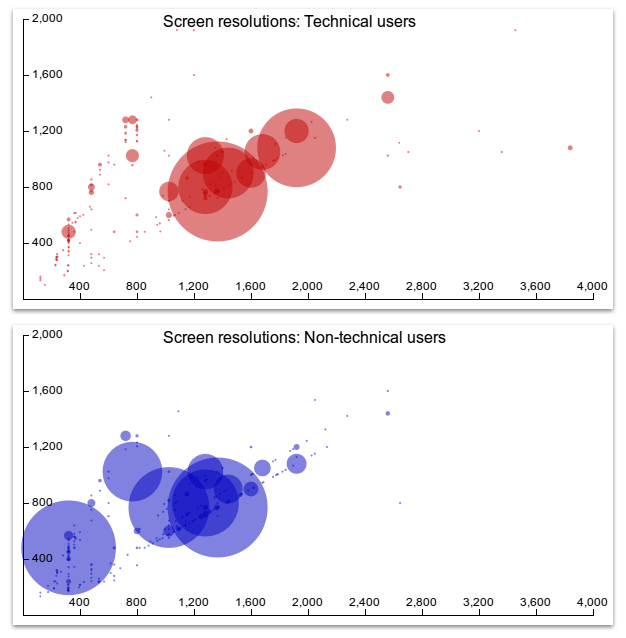 Click the image to see the original graphs and their raw data.

This may be just a small, simple experiment, but what lessons can we learn from it? Namely that devices in use in the real world are much more varied than we might think, and much more mobile-centric than I personally expected. As web designers and developers, we often socialise with a similar crowd of colleagues, friends and those we meet at tech events. It’s been said before, but it’s important we look out of this bubble when designing web apps and sites. Real users out there in scary non-geek land are the ones we should be thinking of and getting feedback from if we want our creations to reach their full potential.

Published on 17 January 2013 in Blog. Edit this article on GitHub. Licensed under a Creative Commons Attribution 3.0 Unported license.