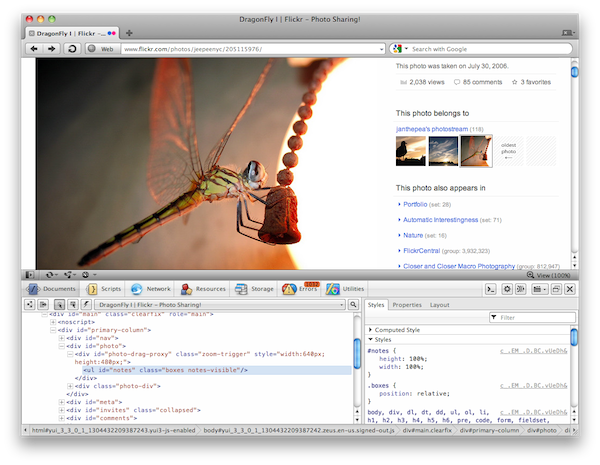 We have recently pushed out what we hope will be the final release candidate of Opera Dragonfly 1.0 on the experimental branch. Unless a major show stopper is found during release testing, this will be the build that will replace the alpha version on the default path. The green nymph will be no more, and in its place will be the beautiful grown up Dragonfly.

The key change from the previous RC is that the UI has been localised into 42 languages. These localisations are now complete and included in the build. We owe a lot of thanks to all of our volunteers for all their hard work in getting the language strings translated.

There have also been a number of P1 bugs fixed since the last post on this blog, including a security fix. We would like to thank t.ashula for finding and reporting a script injection vulnerability in the experimental branch, making it possible to fix the issue without it ever appearing in the normal public release.

We’re very much looking forward to Opera Dragonfly 1.0, after many man years worth of effort that went into building and testing this release. We hope you find it as useful when developing and testing your sites as we do internally.

Published on 3 May 2011 in Blog. Edit this article on GitHub. Licensed under a Creative Commons Attribution 3.0 Unported license.