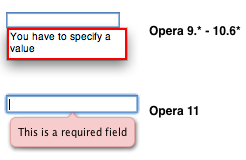 We've cleaned up our old web forms implementation from 2005 — first introduced in Opera 9.0tp —, so as to align it with the current HTML5 spec and prettify things a bit.

One of the most visual improvements is the "wobbly bubbles" theme replacing the previous square error dropdowns, which Bruce shared a sneak peek of back in October. The wording of the error messages has also been tweaked so as to sound more natural.

In addition, we have now added support for the placeholder attribute, and the Search, Telephone and Color states, with the latter popping up a nice color picker. We've also added support for the new HTML5 progress and meter elements, . You can try out these new additions on this simple demo page.

We've been tweaking parts of our SVG engine, which should give things a bit of a performance boost. We've also added support for the timelineBegin attribute, which controls the initialization of the timeline for the document. If you look at this 11.1MB SMIL example, you'll notice Opera 11 will start playing the animation while the rest of the file is still being downloaded.

In the last couple of desktop builds, we've been improving the developer experience step by step, so as to smoothen the rough edges in the extensions development workflow. One missing piece in the puzzle is getting Opera Dragonfly to work properly with extensions. This build is a first step to achieve that: you'll find that the debug context dropdown now has a new "Opera Extensions and Opera Unite" section listing all background processes, and the script dropdown now distinguishes between document scripts, BrowserJS, UserJS and the extension runtimes. However, there are still a number of issues that need to be resolved, so tread with caution. If you have feedback, use the Bug Wizard and forums.

It's worth mentioning that David has posted more details about these and other Opera Dragonfly features on the project's blog. Note that for now, you have to set the cutting-edge path in opera:config#DeveloperTools|DeveloperToolsURL in order for the above features to become available.

Published on 6 December 2010 in Blog. Edit this article on GitHub. Licensed under a Creative Commons Attribution 3.0 Unported license.