Since the release of version 1.0 back in March this year, over 200 bugs have been fixed…but it doesn't end there: this latest version adds a boat-load of tweaks and additions. For a breakdown of some of the new and improved features, head on over to the Opera Dragonfly 1.1 release announcement. 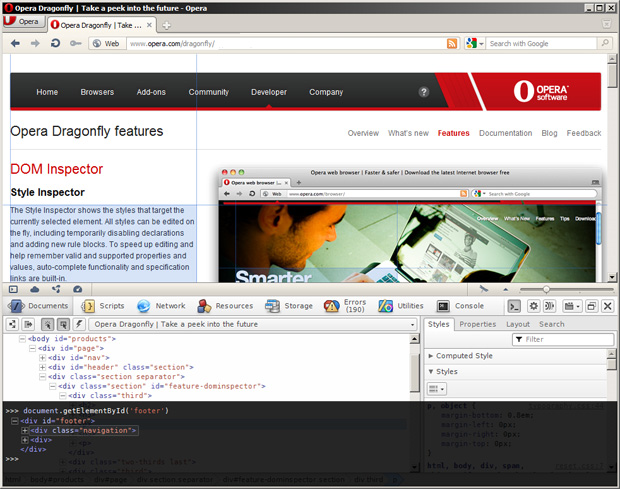 We're really excited about the refinements and new features we've added to this release, and we hope developers will like them too. We constantly strive to make Opera Dragonfly better, but most importantly suited to the needs of our end users — so if you have any issues or suggestions, we'd appreciate your feedback about Opera Dragonfly 1.1.

On a more personal note, I'd like to use this blog post to express my deep gratitude for David Storey, who not only acted as product manager for Opera Dragonfly, but is actually the guy responsible for setting up the Developer Relations team here at Opera in the first place, as well as continuously fighting the good fight for web standards and increased site compatibility in his role as Chief Web Opener.

Sadly this release of Opera Dragonfly is David's last hurrah here at Opera, as he's now moving on to exciting new ventures. As his successor in the role of product manager I've certainly got my work cut out for myself…some mighty big boots to fill. But I hope I'll do the product, the team, and our users justice!

Published on 1 September 2011 in Blog. Edit this article on GitHub. Licensed under a Creative Commons Attribution 3.0 Unported license.