How to Use the W3C Geolocation API

Imagine visiting a city for the first time. You're hungry, but don't know where the nearest restaurants are and which of them are any good. Wouldn't it be nice if some app could detect your location and provide you with a list of restaurants closest to you, along with reviews and ratings for each one?

And this is not the only consideration — could it detect your location accurately, keeping in mind your privacy as well? This is where the W3C Geolocation API comes in, support for which is included in Opera 10.60 and above.

By Geolocation, we mean the use of scripts within the browser to determine where a particular user is. This will have countless advantages in Web applications and is an exciting capability for browsers to have. For example, you could build a Web service to provide you with information about the nearest hospital, with turn-by-turn route navigation info. Or, how about an app that tells you about all the cool meetups happening in your area in the coming days, along with exact locations? Excited yet? Read on!

People have been trying to determine a user's location for quite a while on the Web. However, most of the older methods are quite inaccurate, and don't seek the user's permission to access this information. The W3C Geolocation API is specified by the W3C to provide a uniform way for developers to make location-aware Web applications. It is much more accurate and built in such a way that the user is able to control whether his or her location information is to be revealed on a given site or not.

How is location determined?

In browsers that support Geolocation, user locations are determined based on a combination of data from users' wifi access points and users' IP addresses.

How will visitors to your site approve or deny sharing of their location information?

Figure 1: A browser alerting the user that an application is trying to access their location data via the Geolocation API and asking for their permission to access it.

Whenever you access a page that includes Geolocation code, a small notification will appear at top of the page asking whether you want to share your location information with the application or not (see Figure 1). If you do, then the information will be shared; you can also choose to select remember my choice for this site so that in future you won't be asked again and the application will automatically go with the choice you made the first time. Similarly, you can block your location information, giving you as the user a case-by-case choice in terms of your privacy.

How do you use it in a Web app?

Using the Geolocation API is easy. First, you'll want to determine whether the user's browser actually supports Geolocation. You can do this with JavaScript to query the browser and see if it supports the navigator.geolocation property. For a one-shot determination of the user's location, you can use the navigator.geolocation.getCurrentPosition() function which, if successful, will call whichever success callback function you choose.

A good way to do this is:

In a production system, you should consider fallback so those users without Geolocation-enabled browsers can manually enter their location by inputting their postal code or choosing their position on a map, for example.

Then you add the success function:

You can write the error function however you want. Refer to the PositionError Interface in the specification for more on error codes. For the sake of the example, we'll keep it simple for now:

Here is the resulting example page.

If you want to keep watching the user's position and update the function accordingly, you can use the navigator.geolocation.watchPosition() function. It accepts the same parameters and works in more or less the same way as getCurrentPosition(). In both getCurrentPosisition() and watchPosition(), only the first parameter is necessary. The second parameter, which handles the error callback, is optional. In addition to that there is a third optional parameter — an object containing attributes that define:

There are a few ways to do reverse geocoding and all of them require using some external service or other. You can use GeoNames.org's API to do it, as well as WikiMapia's API or Data Set called Nominatim, run by volunteers. Google Maps also provides a way to reverse geocode latitude/longitude pairs into actual addresses to display on a map.

Finding you on a map

Let's quickly go through a small example that uses Google Maps to display the map of the place where the user is currently located. We'll first include the script to load Google Maps onto the page:

Then we include our logic to determine the location and display a map centered on that location:

Finally, the HTML and CSS to display the data is as follows:

Figure 2 shows the resulting Geolocation example. It will ask you for permission to share your location and then display a Google Map of your location. 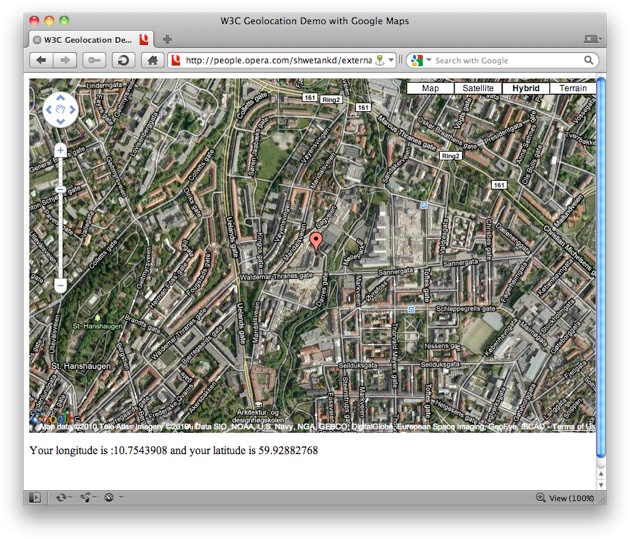 Figure 2: Screenshot of the page, which shows your co-ordinates and a map centered on those co-ordinates.

In the above screenshot, you may notice a small icon representing geolocation on the right side of the address bar. This icon will be on any page in which geolocation is being used. If you deny geolocation privileges to a page which requests it, then this icon will not appear on the address bar of that tab. Click on the icon to access further settings related to geolocation, such as denying a page access to your location.